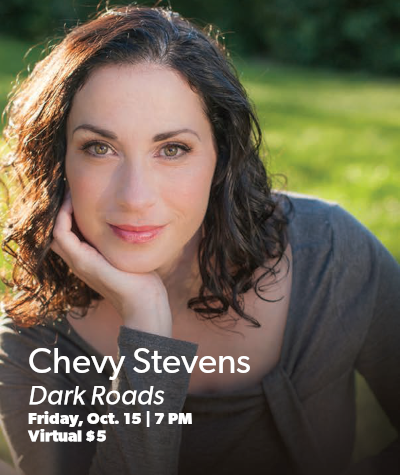 For decades, young women traveling Cold Creek Highway have gone missing. When Hailey McBride flees an unbearable living situation to hide in the area wilderness, she counts on people thinking she was another victim of the killer. One year later, Beth arrives in search of the truth about her sister Amber, who was murdered the previous summer. But there is more than one person lying in Cold Creek.

Chevy Stevens lives on Vancouver Island with her husband and daughter. For most of her adult life she worked in sales, first as a rep for a giftware company and then as a realtor. While holding an open house one afternoon, she had a terrifying idea that became the inspiration for Still Missing. Chevy eventually sold her house and left real estate so she could finish the book. Still Missing became a New York Times bestseller and won the International Thriller Writers Award for Best First Novel.

When Chevy isn’t working on her next book, she’s hiking with her two dogs on her favourite mountain trails and spending time with her family. Chevy’s current obsessions are vintage airstreams, all things mid-century modern, Hollywood memoirs, and stand-up comedians – not necessarily in that order. Her books, including Those Girls, which Stephen King called “incredibly scary,” have been published in more than thirty countries and optioned for film. Dark Roads is her seventh novel.

Jana G. Pruden is an award-winning writer at The Globe and Mail. She lives in Edmonton.